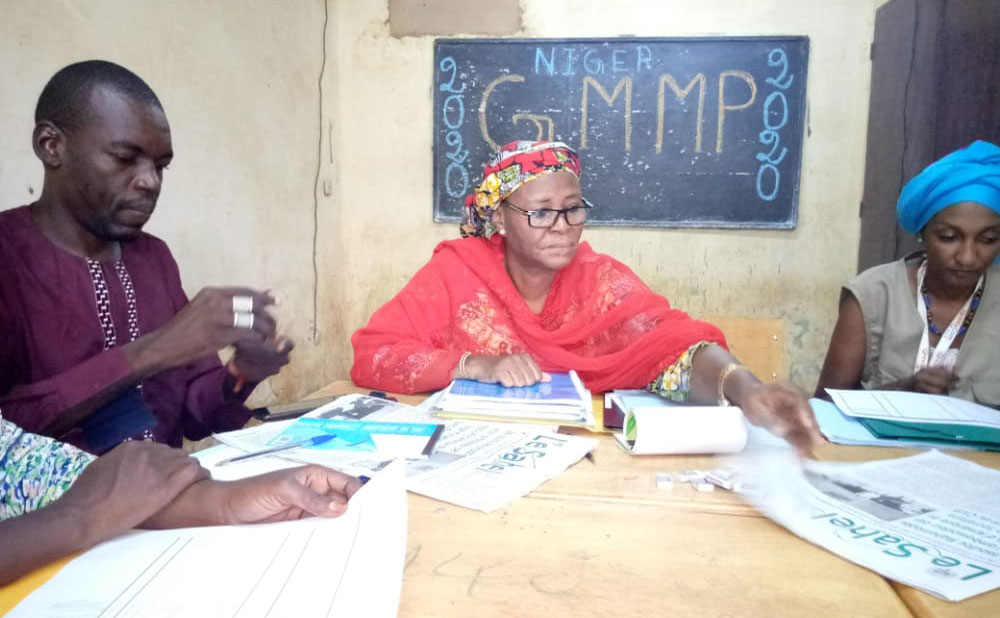 The Global Media Monitoring Project is the largest and longest longitudinal study on the gender in the world’s media.  It is also the largest advocacy initiative in the world on changing the representation of women in the media.  It is unique in involving participants ranging from grassroots community organizations to university students and researchers to media practitioners, all of whom participate on a voluntary basis.

Every five years since 1995, GMMP research has taken the pulse of selected indicators of gender in the news media, studying women’s presence in relation to men, gender bias and stereotyping in news media content. The fifth research in the series was conducted in 2015 by hundreds of volunteers in 114 countries around the world.

The idea for a one-day study of the representation and portrayal of women and men in the world’s news media was first conceived at the international conference ‘Women Empowering Communication’ in Bangkok in 1994. MediaWatch – Canada with support from WACC-UK and Status of Women Canada among others took up the challenge of coordinating this ground breaking initiative – the Global Media Monitoring Project – the aims of which were:

On January 18, 1995 volunteers in 71 countries monitored their news media on radio, TV and in newspapers, resulting in the collection of more than 50,000 media records. The results of the one-day study were published in the groundbreaking report Global Media Monitoring: Women’s Participation in the News and presented at the Women’s NGO Forum in Beijing in September 1995.

The Beijing Platform for Action’s Section J remains the touchstone for the GMMP.  The GMMP is directly related to Strategic objective J.2.: Promote a balanced and non-stereotyped portrayal of women in the media.

The GMMP showed that news paints a picture of a world in which women are virtually invisible. Women are dramatically under-represented in the news. A comparison of the results from the four GMMPs in 1995, 2000, 2005, 2010 and 2015 revealed that change in the gender dimensions of news media has been small and slow across the 20-year period. Only 24% of news subjects – the people who are interviewed, or whom the news is about – are female. Women’s points of view are rarely heard in the topics that dominate the news agenda; even in stories that affect women profoundly, such as gender-based violence, it is the male voice  that prevails. When women do make the news it is primarily as ‘stars’ or ‘ordinary people’, not as figures of authority. As newsmakers, women are under-represented in professional categories. As authorities and experts, women barely feature in news stories. While the study has found a few excellent examples of exemplary gender-balanced and gender-sensitive journalism, it demonstrates an overall glaring deficit in the news media globally, with half of the world’s population barely present.

The methodology has been updated and improved with each successive GMMP.  Refinements have been informed by approaches arising from the experiences of media and gender justice advocates around the world and has benefited from the contribution of trained professional researchers.  The methodology and research instruments are made freely available in at least four languages.

It is an adaptable methodology and research instrument that has subsequently been used for other purposes by other organizations both at the local and international levels. For example, in 2001, RED-ADA, Bolivia’s most important women’s communication network monitored the portrayal of women in advertising on TV, radio and in the press using the methodology developed for GMMP 2000. A second example is the case of the Southern African Media and Gender Institute (SAMGI) that in 2007 adapted the GMMP methodology to monitor reportage of HIV/AIDS from a gender lens in South African news media.

The results of GMMP have been used in a myriad of ways by gender and communication groups worldwide, in research, training for media practitioners, media literacy education for media audiences, advocacy and lobbying work.

The GMMP has also been an important tool in advocacy work, with some notable successes, for example in Jamaica where, upon receiving a copy of the GMMP 2000 report on International Women’s day on 8th March 2001, the Assistant Executive Director of the Broadcasting Commission highlighted the usefulness of the report to communication policy development, saying it had “extremely important information to the Commission’s work, particularly in the formulation and implementation of content standards for gender portrayals in the Jamaican mass media.”

In Senegal, the Inter-African Network for Women, Media, Gender and Development (FAMEDEV) continues to apply the GMMP methodology in training workshops for the organization’s focal points in francophone West and Central Africa. In Argentina, the publicity surrounding the publication of the GMMP 2005 Report was the impetus for the formation of a national network of journalists for gender responsive media.In Malta, the Gender Advisory Committee of the Broadcasting Authority uses the results of GMMP in their research and training programmes.

The Global Media Monitoring Project and the “Who Makes the News?” research report have been widely referenced around the world.  References to GMMP are found in numerous resources, from the Arab Human Development Report published by the United Nations Development Program (UNDP) to the  International Federation of Journalists and the United Nations Educational, Scientific and Cultural Organization (UNESCO).

At the seminar ‘Women and the Alliance of Civilizations: Opportunities and Challenges’ held in April 2008, the Director of UN International Research and Training Institute for the Advancement of Women (UN-INSTRAW) cited the results of GMMP to emphasize the value and need for more research on the portrayal of women and men in the media.

The UN General Secretary’s report on “The safety of journalists and the issue of impunity” (UN General Assembly, 4 August 2017, A/72/150) cites the GMMP findings as evidence of the persistent underrepresentation of women in journalism and in news content.