Integrating a gender lens in journalism

“By determining who has a voice in national debates, who is silenced, which issues are discussed, how they are framed, the media have the power to maintain the status quo or challenge the dominant order.”
–WACC-IFJ Gender-ethical journalism resource kit

WMW-Jamaica on behalf of WACC facilitated a training session at a workshop for media workers in the Organisation of Eastern Caribbean States. The workshop was organized by the Caribbean Association for Feminist Research and Action (CAFRA) as part of a CAFRA-WACC project seeking to strengthen the capacity of media professionals from St. Lucia, Dominica, Grenada and St. Vincent & The Grenadines to integrate a gender lens and human rights focus in journalistic practice. The 2-day workshop for gate keepers in the media, including senior journalists and heads of media associations was held from 15-17 January, 2018.

10 key points
1.    The way in which media represent women and vulnerable groups can influence decisions taken on their behalf and how the rest of society regards them.
2.    The concept of gender ethics in news media can be understood in the context of fairness and justice, balance, accuracy and human rights –  key principles of professional journalism.
3.    Research data from the Global Media Monitoring Project reveals the persistent under-representation of women across time and space, as well as gender disparities in the coverage of women and men, including gender stereotypes.
4.    Using a gender lens can help to avoid stereotypes of sex, gender, class (and other social categories) in order to create more accurate messages.
5.    Gender ethical journalism is a professional, rights-based response to the many International commitments signed on to by Caribbean nations,  such as the Beijing Declaration 1995, CEDAW, SDGs #5, 9, 16  and more.
6.    Gender ethical journalism can benefit society and contribute to a more equitable, enabling environment for human development.
7.    Gender ethics in media means being aware of messages that we convey about the social and gender relations of power – based on race, class, gender. This applies particularly to reporting on violence and conflicts, and gender-based violence.
8.    As defenders of the public interest, news media need to include diverse, plural voices; this broadens public discourse.
9.    The awareness that gender (and other factors) influence people’s experiences helps journalists to unearth distinctive, engaging, memorable stories.
10.    Codes of Ethics can be operationalized by using gender-responsive checklists and guidelines. 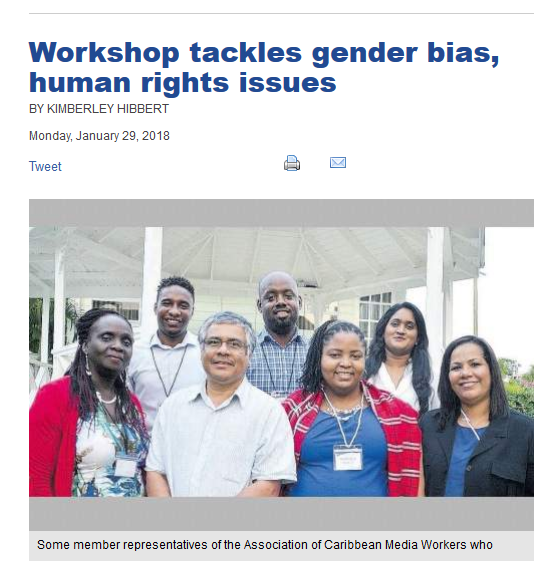 WMW-Jamaica coordinates the Global Media Monitoring Project (GMMP) in the Caribbean Region. The project is funded through the Canada Fund for Local Initiatives administered by the Canadian High Commission in Barbados.