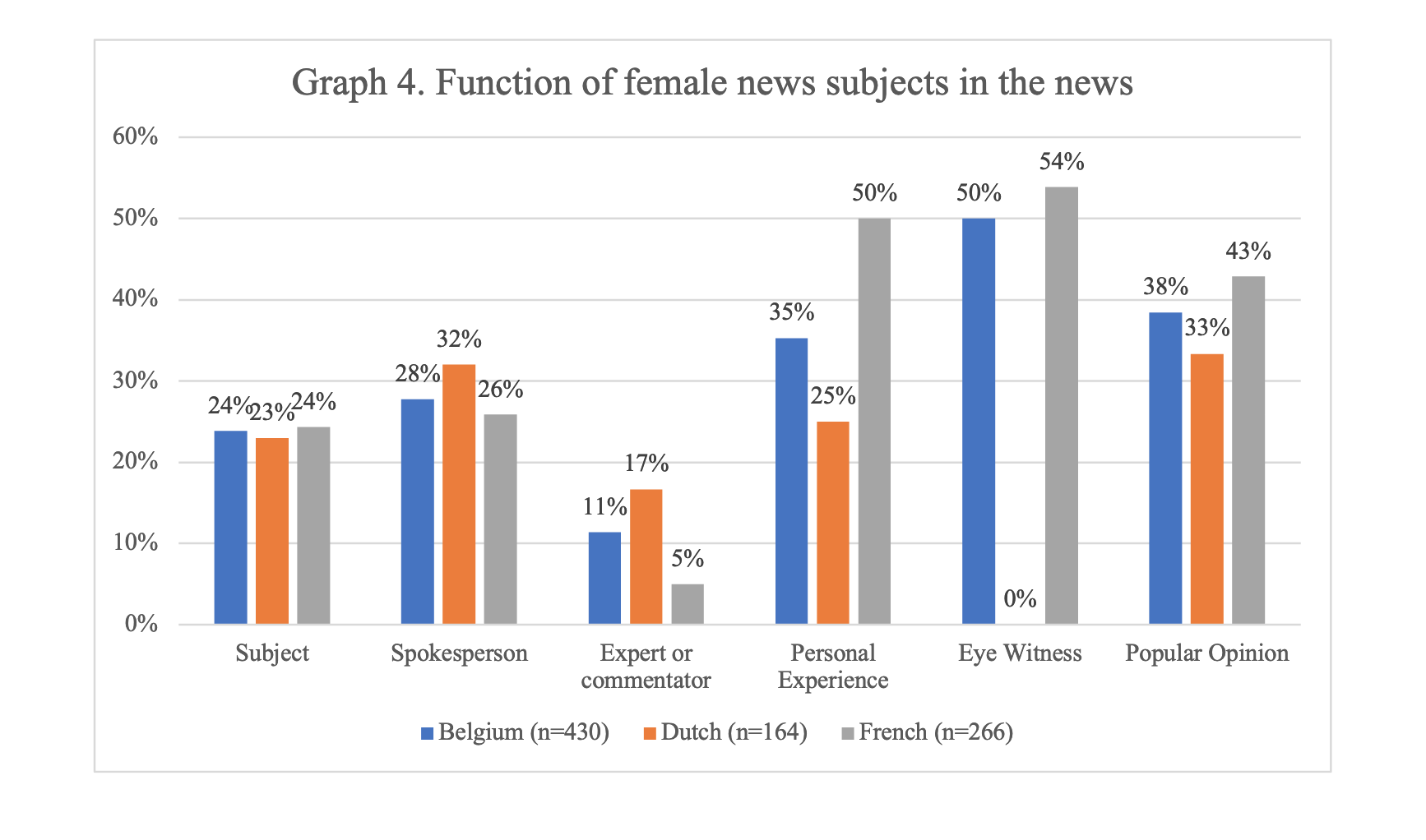 The Global Media Monitoring Project (GMMP) team in Belgium is urging Belgian news media and policymakers to “represent the diversity of society and not only the voices of the male elite,” citing the latest GMMP data which finds that women are still “highly underrepresented” as news subjects and sources .

In both traditional and digital news media, women account for only 26% of news subjects, the GMMP Belgian team says in its 2021 report.  This figure is 2% lower than the European average of 28% in both legacy and digital media captured in the GMMP Europe regional report.

“The share of women in the news deviates strongly from the representation of women in
the Belgian population,” says the report, noting that the concept of “symbolic annihilation” introduced in 1978 by American sociologist Gaye Tuchman “remains relevant today.”

Women are particularly underrepresented as news subjects in stories about politics and government, which are considered the top stories, accounting for only 19% in traditional media, and 17% on digital media. They are represented more in news that are lower in the hierarchy of stories such as celebrity, arts, and sports news. Compared to traditional media, they are less represented in digital media in news about the economy, science and health and crime and violence.

Women are represented more in Covid-related stories across the sample. Overall, they account for 64% of Covid-19 news stories on politics and government, and 51% on the economy. They are slightly less represented in Covid-19 news on science and health (44%), social and legal info (45%) and celebrity, arts and media, and sports (29%).

However, only 3.6% of Covid-related stories challenged gender stereotypes.

The Belgian sample also shows that the occupation of female sources is not stated in 36% of news items. Women also tend to be covered less in occupations “traditionally associated with high status and masculinity in society,” such as politician/member of parliament (20%), police/military (25%), academic expert/lecturer/teacher (9%), medical professional (14%), and lawyer/judge (29%).

“Women are even absent in science, technology, and engineering, trade, agricultural and religious professions,” said the report.  They are more represented in professions typically associated with less status and femininity, such as celebrity and media
figure (67%). They are also dominant in categories that are more associated with the personal than with the professional such as student, child, villager, or pensioner.

“However, it was remarkable that there was a more balanced representation of men and women in occupations such as government employee, public servant, and spokesperson (47% women), which are professions in which men are typically dominant,” said the report.

Women account for 41% of reporters, presenters, and announcers in Belgian news media, which is lower than the European average of 47%.

The report urges news organisations to share good practices to help build “more robust and efficient policies for equality,” and to conduct more studies on gender and media, including threats faced by female journalists, which tend to push women out of the journalism profession. “GMMP research is a good example of such a collaboration between journalists and activists, that can be continued in other studies as well.”